Selecting the streaming services for you

Watch Cordkillers 292 - Don't Be Ridisculous (w/ Fraser Cain) where Fraser Cain details how he used his watchlist on Just Watch to create a spreadsheet of how many movies and TV shows he wants to see are on each service. He then further took the monthly cost of each service divided by the things he wants to watch to figure out the ones with best ROI. If you are looking to budget ths is a pretty quick and easy way to do it. Though I might suggest of there are any deal breakers (stuff you do not want to lose access to) you may want want to add some columns for those as well to mark what service(s) they are on so you do not drop the wrong one.

Just Watch is an awesome free service by itself. It is similar to Roku's watchlist feature where you can just plug in the stuff you want to see and the watchlist shows what is available on what services you subscribe to. With the added plus it is a well formatted list instead of Roku's notifications format. It also makes it easy to see if something is available on a service you do not have.
Posted by Avatar42 at 9:30 AM No comments:

Email ThisBlogThis!Share to TwitterShare to FacebookShare to Pinterest
Labels: Streaming


If you follow the instructions the hardware part goes pretty smoothly. Step 1D is the only tricky part. Read the whole bit about how to apply pressure in steps or you might break off a tab.


Otherwise you will be manually be setting them up again. Note in theory One Passes should be downloaded from your TiVo account but if you want to have them today you will need to load them via kmttg.

Next bit is you will probably need to call your cable company and have them push an activate to your cable card even though the host ID does not change.

If you favorited channels you will need do those again manually.

Lastly you will need to reactivate all your apps.

Update: looks like you need to turn auto skip back on as well.

Note part of that used space was programs already recorded by my uploaded One Passes. 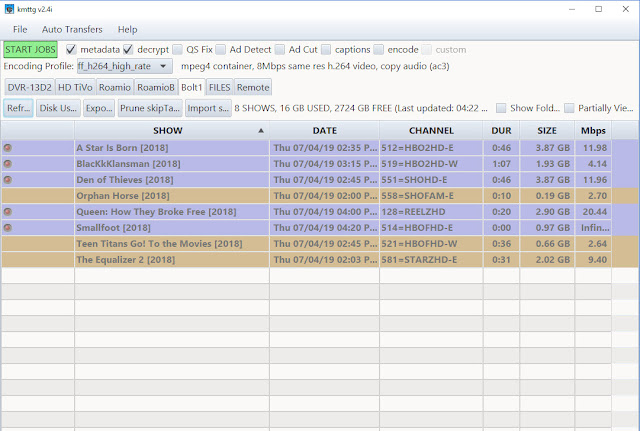 If 3 TB is a bit tight you should know WeeKnees has options with Bolts up to 13TB and Roamios up the 20 TB
Posted by Avatar42 at 2:25 PM No comments:

My watched vs available sheet Cord Cutting Notes  now pulls in the csv files created by my TiVoGet program as part of the Last Show update. I also updated the menu to the new sheet model. (Something you seem to need to do now if you edit a sheet script with the old menu model in it.)
Posted by Avatar42 at 4:01 PM No comments:

My watched vs available sheet Cord Cutting Notes now has a status column at G on the shows tab that combines info copied in from renewcanceltv.com with auto pulled data from epguides.com's Current U.S. Shows on Hiatus or Discontinued page to try and let you know the status of shows listed on the shows tab.

The Git project is at https://github.com/avatar42/TiVoGet

The idea is you have this run each night (Task Scheduler or cron) to update csv files in your Google Drive and the use the SheetGo Plugin to read in the info from the csv files to your copy of my Cord Cutting Notes sheet Then I should be able add automation to look at shows watched (watchedTime > 0) in the Now Playing list to auto update the sheet. In theory I could use this to get latest available episode info as well for any shows not listed in ShowRSS.

On "Last Show" tab I added a column.

Instead of updating the offset key manually and then copying columns now you just click the update menu item to do all the steps. 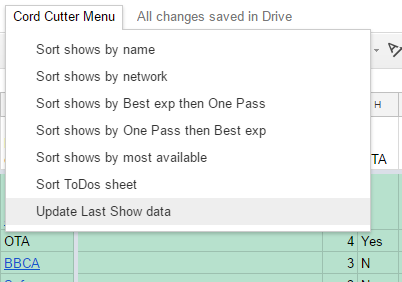 This required adding a column to sort the feed data which still comes into column A. The macro updates the offset key with a current timestamp to trigger reimport of feed data. It then copies the data to column B so that is can be sorted (to get around the issue of older episodes sometimes coming higher in the feed than newer ones). Then finally it copies the diffed data in columns O and P to the cached data area.
Posted by Avatar42 at 2:13 PM No comments:

Email ThisBlogThis!Share to TwitterShare to FacebookShare to Pinterest
Labels: sheetUpdate

I'm a bit behind on this one as I've been mainly on Hulu and Amazon lately but when I went to Netflix this weekend I found they had changed out the rating system. For why look here. To me the "logic" described is dubious at best. If you Google "New Netflix rating system" you will see it is NOT going over well with anyone. My main gripe is when I'm browsing titles I used to be able to see my rating if I've rated it. That would tell me if I'd already seen it and what I thought of it. Having rated over 2000 titles in the old Netflix system that came in REAL handy. (I have friends that have rated WAY more.) It is really depressing to pick something that looks good only to realize after watching awhile that you have seen it and hated it. The new system does show you the ones you given a thumbs up or down but not the ones you have given stars. Fortunately the info has not been completely lost and your ratings old and new can still be seen from your My Activity page. (I suggest you down load this page while you can.) But that begs the question why they are not displaying that you have already rated it in the browser? Either as the star rating still there in the DB or by converting it to the thumbs up/down system for display.

Another new bit is now for unrated (via new system) titles you see a percent match instead of the average rating of other subscribers. I have not got a feel for how accurate this is yet but again that would infer they are trying get the model even more accurate. Generally the way to do that is to get finer detail of the watcher's like and dislikes not less.

The other issue with a binary system of course is what about the stuff that is just OK? As in stuff that was worth watching once but not again. How do I rate that with love or hate as my only options? Marking it either way will skew their suggestion model and not marking leaves me no way to see I've already watched it. To look at this I downloaded my "My Activities" page with over 12 years of ratings and converted it to a sheet so I'd have the data. And to see how is much this might truly effect things. I found:

Facebook removed their rating system for movies and TV shows awhile back too. While you can still add them to watched / want to watch sections and even write a review as a comment, all those star ratings you did are now toast. Funny thing is when you try to find out when did this there appears to be no stories about. Probably why Netflix thought it was a good idea to follow suit. Unfotunately for Netflix people are noticing.