Just Watch is the ultimate watchlist

Where I'm coming from

If  you are reading this you are probably familiar with my Google Sheet for tracking watched and available shows. It was starting to lag under the weight of all the data so I started looking at replacing by writing an open source app called Watchlist. As a shortcut, since I planned on replaced a few other sheets as well, I wrote a program for converting sheets to apps called GenSpring. Somewhere along the way though JustWatch added tracking of which episodes you have seen. This is one of the things that bugged me about the sheet version and I had planned to add to my Watchlist app.

So JustWatch does almost everything I had on my wishlist except:

Pulling recordings info from your DVRs. Though at this point the TiVo pull I have coded up not longer works and pulling from Tablo or Plex while doable seems like more trouble than it is worth as almost everything other than the news is available to stream from somewhere. Even then you can probably still still track shows they just will not appear in your watchlist as available. See Meet the Press for an example.

Your personal rating. Though you can still record that in IMDB, filter and sort by IMDB average rating and each show has a link to its IMDB page. So again not really much of a loss here. The way I rate stuff in IMDB is 5 and below is stuff I'm not going to watch more of so I just remove those from my watchlist.

No link to show epguides page. There is the IMDB link but there is often info on epguides you will not find anywhere else. But again not a deal breaker by any means. Especially since I would probably need to manually maintain the links.

No place for personal notes. Sometime it is just nice to have them like when the episode number in their system are diff from the ones in service you watch the show on. Or in a case where I know there is a movie or two often listed as the final season(s). Or a quick note why you stopped watching or that it does not get good to episode X. Or show on service X has more commercials than service Y.

Filtering and or sorting by service. Kind of odd this is one of the few they left out. Especially when filtering by services you have is the main feature. They even have service listings for direct vs via Amazon and various tiers if a service has them. Again still more of a gain since I had to manually track which service I wanted to use to watch on and theirs tracks all options automatically for you.

Now for the even better ways to track shows and movies

First off I do not need to keep looking for info to merge. They are gathering it all for you and even have a feedback link if you see a mistake like what I found with Pandora - Season 2. 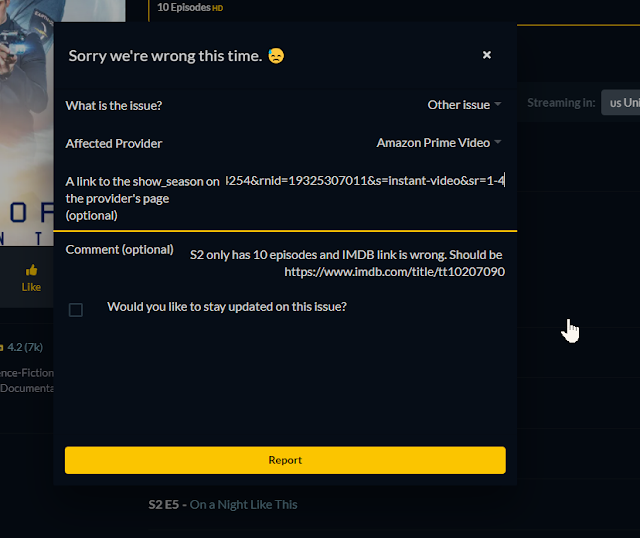 Note too I found a few programs that I'd missed updates for which just shows what kind of task gathering all this info is. So you might wonder how they make money. It appears from low key ads like trailers.

The interface is dead simple. Of course you can search by title or people but they also have new and popular lists that are kept up to date.

All you need to do is hover over the thumbnail and options appear. For a movie you get 4 icons for, left to right, watchlist, seen, like and dislike. In white if not selected and yellow when has been. 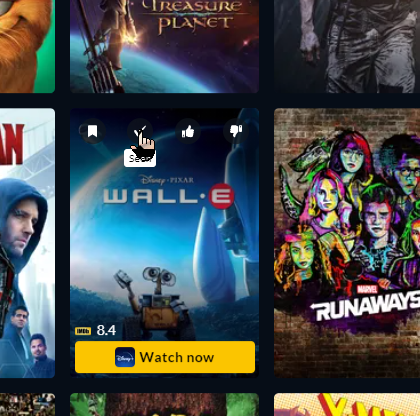 If you select seen it automatically prompts you to select like or dislike. 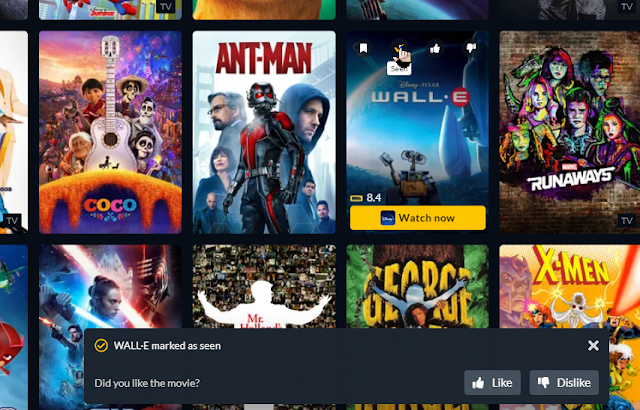 If it is a show, clicking watchlist prompts you for how much you have seen. 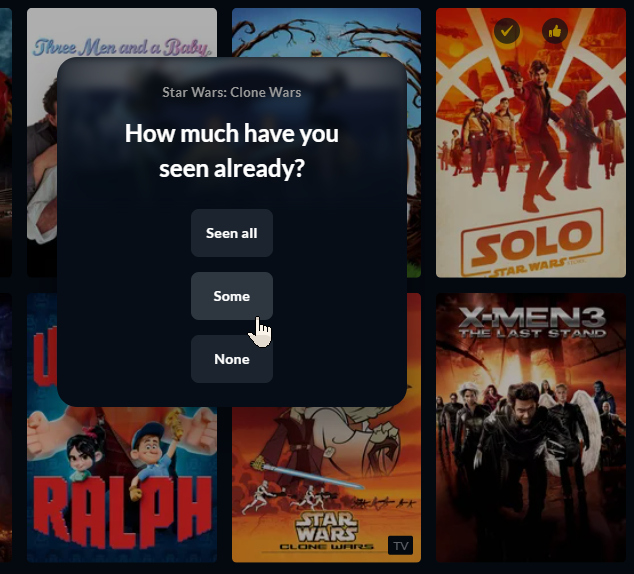 If you click some you can select seasons and or certain episodes. Note you can select all or a season and then deselect some which makes it real simple to add a show with lots of seasons you have seen all but a few episodes of. Also in most cases if a season it showing but not out yet you can still click seen all and it will not add those unavailable episodes.

Again dead simple. By default it shows you all the shows or movies in your watchlist which mainly shows what you have yet to see though it might not be available. One gotcha/glitch here. Notice the only the S2 E4 episode of Only in America with Larry the Cable Guy marked so it shows the next as S2 E5 though all episodes are available.

But that is OK because you filter and sort this down to just what you are in the mood for and that is available for you to watch for what you are willing to spend ($0-50).

You will notice in this view there is a check mark you can click as you watch shows. Again making it dead easy to update.
One other small glitch I've noticed the the watchlist does not always update if, for instance, go to a show, mark an episode as watched and go back to the watchlist. I page refresh sorts it though.