Rough Draft but been so long trying to sort this mess I wanted to go ahead and make this info visible.

Tablo seems to see the same active channels. Note Antenna Web was pretty useless here. It says I should only be able to get signals from 4 towers 7.X pretty easy but I can not. Even stranger is it is on a line between 36.X and 18.X which I get great but Antenna Web says should be weaker despite being a mile closer. The 4th being 62.X. If I type in just my zip code it places me ~7 mile east and shows a lot more channels. Many I can not get though. Here is what I can actually get. 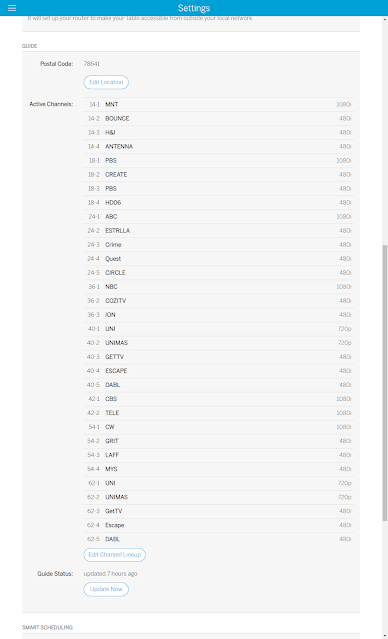 Interestingly while comparing channels I found the 40-X channels TiVo seemed to have issues with. Channel scan selected the wrong ones and did not have show info for some. But then while no info was showing for 40-3 TiVo, Tablo said an infomercial should be playing but Maverick was actually on. Note the 40-X channels are the same as the 62-X but in higher rez. And 62-3 said Bret Maverick was on. When I went to see which had better signal via TiVo it seems to report 60 for all channels I can watch. Even 40-6 through 40-9 which Tablo does not list and neither seem to think there is video on. TiVo says it is KISA-LD San Antonio which is at least 90 miles away, across Austin so I definitely should be getting 0 for them.

Also the info for 54-4 (called Mystery by both but on screen logo and TiVo channel list in settings says is CourtTV) has been wrong the few times I've looked at the channel. But the channel itself seems to contradict itself as to if it is two channels or one and what is on.

Tablo's fast forward and rewind do not show video till you stop. Instead press right arrow. This brings up stills you can arrow forward and back though then use select to start playing at the new point.   Note this only works after recording has stopped. However you can jump forward or back in the same ~30 second intervals you just can not see thumbnails of where you are.

Tablo's season pass are better in some ways not in others.

Seeing some pixelization on play back of morning news while recording going on,

Started seeing odd rebooting when trying to play recording programs on Sunday morning. Might be maxed out, HD issues or because was also connected from PC. Need to monitor this. Note Trying to play a recording that ended at one of those reboots may cause another reboot.

Here is what I've been seeing:

Sunday morning I was trying to record 3 of hour long news casts. The video of all 3 programs appears to be broken in the same places. I tried to start watching one of the recordings and some random time later the the video stops. If watching via Roku the screen says reconnecting. Via the web I reload the page to get it back. When it comes back all the recording streams have another recording. Note both Tablo and Roku are on wired connections.

Later on Sunday it was dropping out just trying to navigate menus.

Weekdays I'm recording 3 of the 2 hour morning news programs starting about an hour before I get up. Again they were splintered.

I was trying to watch a recording yesterday afternoon via Roku and it would stop and hang with a spinner. Some times I would get a message to reduce recording resolution. (Note the main reason I bought Tablo over Fire TV was 1080 support.) Only way to recover seems to be to exit the app and reenter.

Given the Tablo is in the server room with the rest of the AV, computer and network gear I can't comment on the status LED. A Tablo log file would be REAL handy here. My network monitor reports multiple reconnects though it often misses short duration outages for wired connections. Some of the recordings where around a minute:

Note looking at Monday's recordings I'm seeing a a couple PBS shows tried to record but where split into several segments. PBS is the strongest signal I get (level 72 on the TiVo scale). Each show was split 3 times the 2 shortest under a minute. Oddly when I played one it actually turned out to be 16 minutes long. They were dups the TiVo already had so it did not try an record them. Checking a couple other splintered ones from Sunday night I found similar results. Both an similarly strong signal channels. 60 Minutes for example shows as 6 segments. The first < a minute but was 16 mins long. When I checked the same recording on TiVo I could find no hint of bad signal. So far the only thing all the bad recordings seem to have in common is they are 1080i signals. But then all the main channels are.

Note this AM I was seeing something diff. One of the stations had some sort of issue and the Table stopped recording just that show and Tablo flagged the recording as stopped due to weak signal. I can confirm there was a signal issue from the TiVo recording of the same show. The station dropped out completely and then stuttered for close to a minute before fully recovering. So the TiVo handled the outage MUCH better. Still I could probably live with lost of half of a single show for the price diff. Dropping all streams and restarting when there is an issue with just one makes the unit useless though. Amazon says I have till January instead of just 30 days to send it back so we can try and sort this a bit longer.

The recordings broken up into multiple recordings is usually a symptom of an intermittent reception error that is causing the recording to stop, and start again when the signal strength picks back up. This can also be caused by the hard drive on the Tablo losing connection, or the unit rebooting.

Once you have had a chance to try this out please re-connect the drive to the Tablo, reboot the unit, and then disconnect the antenna. Please try watching a recording without the antenna connected. Do you still have the same issues with the Tablo app?

Please let us know how this goes.

Note I'm saying "rebooting" mainly because any program recording is split into segments after the Tablo reconnects.

Also all the issues I've seen so far have been on the main 1080i feed of the major networks with good signal strengths as measured on my TiVo.

Looks like the signal issue is definitely not it. For 2 days (Sunday and Monday) it was "rebooting" randomly. In the end it did not seem to matter what what I was doing or even if anything was recording much less what so signal seemed to be the only known issue. The morning after contacting support (Tuesday) I found a show flagged as not fully recorded because of signal loss. I had the same show recording on a TiVo and it did indeed drop out. Note the TiVo dealt with the almost full minute of low signal and kept going.

Support replied: "The recordings broken up into multiple recordings is usually a symptom of an intermittent reception error that is causing the recording to stop, and start again when the signal strength picks back up. This can also be caused by the hard drive on the Tablo losing connection, or the unit rebooting.

Once you have had a chance to try this out please re-connect the drive to the Tablo, reboot the unit, and then disconnect the antenna. Please try watching a recording without the antenna connected. Do you still have the same issues with the Tablo app?"

Not sure how I am supposed to "watch TV" without the HD unless he means setting there monitoring the feed for reboots with live TV on I have no interest in see. Talk about a insane waste of my time to make up for no log files!

I did notice the unit was REALLY hot while doing the antenna test (which gave the same failed to record due to lack of signal error without reboot). I added a fan above the unit but looking at the temperature logs for the rack (the sensor is very close to the Tablo) the temperature was actually cooler when the reboots were happening. So heat is probably not it either.

Everything seemed to be running smoothly so I added shows to record Saturday. Including shows earlier Sunday morning. This AM (Sunday) the "reboots" are as bad as before. The same shows are being recorded on the TiVo and I can see no signal issues at all. After the second one I switched to the TiVo to let the Tablo set and it still "rebooted". Trying to watch after recording was finished was still having problems. For instance Meet The Press: It was split into 2 segments, a 31 minute one and 50 second one. Note show is 1 hour. Trying to watch the 31 minute segment via Roku it "rebooted" @ ~16 mins and @ ~26 mins in and then hung at end. Watching it again via the web interface it had a momentary freeze @ ~26 mins in then stopped normally. Temperature logs show it was lowest when the most problems were seen. To me that might indicate an HD issue (though again the diff handling seems odd) but there is 1.63 TB Available of 1.97 TB so I would doubt the same areas have even been written to yet and it is odd that so far the issues only have appeared on the last 2 Sundays and last Monday. I though that might indicate issues deleting recordings as new are added but the extra shows scheduled for early Sunday morning would not fit that either. If there was a way to reformat and or test the HD I'd give that a try but that too is not an option I can see.

My network monitor is only showing a drop during playback as it only records ones longer than 2 minutes. So no help there.

That would seem to only leave a defective device though again the timing would seem odd. Maybe the extra scheduled recordings will shine some light. Again some system logs would probably sort this in minutes instead of all this black box testing.

11/26 noticed the Roku was not seeing the SD card. (System->About) Pulled and reformatted to get working again. Not sure how long it has not been working but first time I noticed getting an having to reload a channel insert a SD card to avoid in future message.